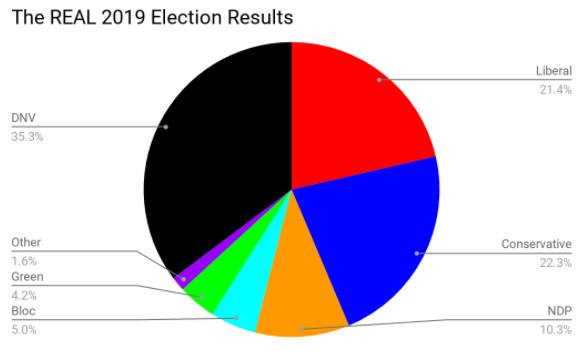 NORTH BAY — With the 2019 Federal election in the bag we have a clear winner in the Liberal Minority government.  While some fear a coalition between the Liberals and the NDP government, one candidate is furious, and has been for years.

Marc Joblin is a North Bay local and is the leader of the Federal Did Not Vote Party, and he feels that he is being ignored. For the second election in a row, his party has been ignored, despite having the highest numbers than the rest of the parties.

“We’ve only been a party for 2 Federal Elections and every time we get ignored by Elections Canada. I thought we came to an agreement that everyone that doesn’t vote is actually voting for us, by not voting. It’s in our name!  Those who vote Liberal are voting for the Liberal Party… those who do not vote, are voting for the Did Not Vote Party!”

We sat down with an election specialist to break down the numbers and see why the DNV have their panties in a bunch.

“When the 2015 election was called, Liberals had 39.47% of the votes, which doesn’t represent the real numbers,” says Election Specialist Jessica Huntz. “What that number SHOULD say is that they got 39.47% of those who voted. 31.5% of those eligible to vote didn’t vote. So, work that into the numbers and you’ll see that Liberals are in second place with 27% and those who didn’t vote made up 31.5% of the total vote. Therefore, the Did Not Vote party got the popular vote, but has received no seats or any acknowledgement.”

In the 2019 election, the Liberals were declared the winner with a minority government, but the popular vote was announced to be the Conservative party with 34.44% which is 1.43% higher than the Liberal Party’s popular vote. This is all of course, ignoring the DNV Party, and this rubs Joblin the wrong way.

“Last election I thought, sure, Elections Canada will ignore me. It’s my first election, I don’t want to be rude and bring it up. But this election was very darn close!  Of course this is just the popular vote, and not seats, but I’m sure getting 35.3% of the popular votes would result in SOME seats. It’s more votes than the Minority Liberal government got! But to be fair, the Liberal Minority Government is in 3rd place for the popular vote behind Cons and myself.”

Joblin plans on bringing this issue to the highest court in Canada to have the results of the previous elections corrected, and to recalculate the ridings, and assign the appropriate seats based on the non-votes that the Did Not Vote party received.

More on this monumental story as it unfolds.