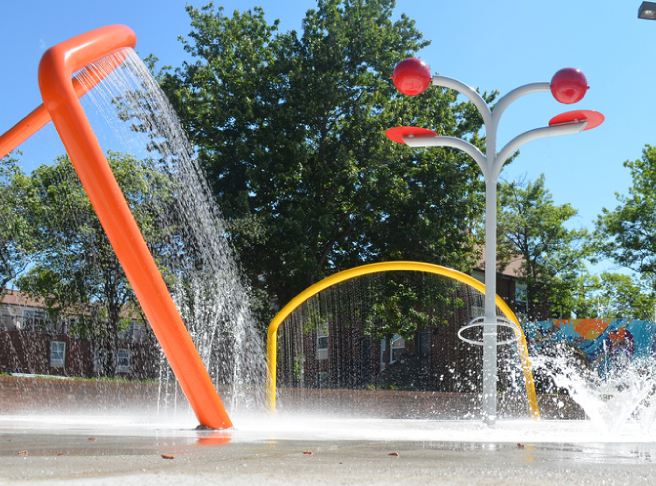 Set to be constructed in 2019, the waterfront splash pad will include a frog pond, spray pool, wading area, and now public showers.

“As you know, we have some problems here in the city,” says City Councillor Grey Terrence. “Not many, but the ones we have we want to deal with. A big one is cleanliness on Main St.”

“I’ve heard from other Councillors, from the police, and from the public that there are occasionally individuals downtown that appear unkempt. Some have said that they look ‘messy’ or ‘dirty’ or ‘addicted.’ But whatever it may be, I have no doubt that all they need is a good shower.”

The one-acre splash pad, which will no longer be built behind Fanny’s, is set to open on Canada Day 2019.

“City Council approached us a few weeks ago about adding in public showers,” says North Bay Waterfront Development Committee member Missy Looper. “And after some discussion, we agreed that they should be a part of the pad.”

“North Bay has so many people that could really use the showers. They may be homeless, or recovering, or just in need of a nice, free bath. Whatever the case may be, they will be welcome at the splash pad.”

While it’s still early, Looper was able to describe how the pad would be built.

“It’ll have hydraulophones, and water buckets, and crazy hoses – all the things kids love! And then five or so meters away will be the public showers. There will be shower curtains on most of them for decency, and a little area for people to leave their clothes.”

“We’re also working with the North Bay Regional Health Centre to make sure there are plenty of safe syringe deposit sites and extra brochures for the Friendship Centre.”

Councillor Terrence says the showers are “a step in the right direction” for a “safer, cleaner North Bay.”

“I’ve no doubt that we’ll soon be known as the cleanest city in Ontario,” says Terrence. “The downtown only continues to improve, and public showers makes us look good and make the needy look better.”

“I can’t see any downside to this at all. Once it’s done, I think we should all take a moment to bathe in the accomplishment the way so many hobos will be bathing at the splash pad.”