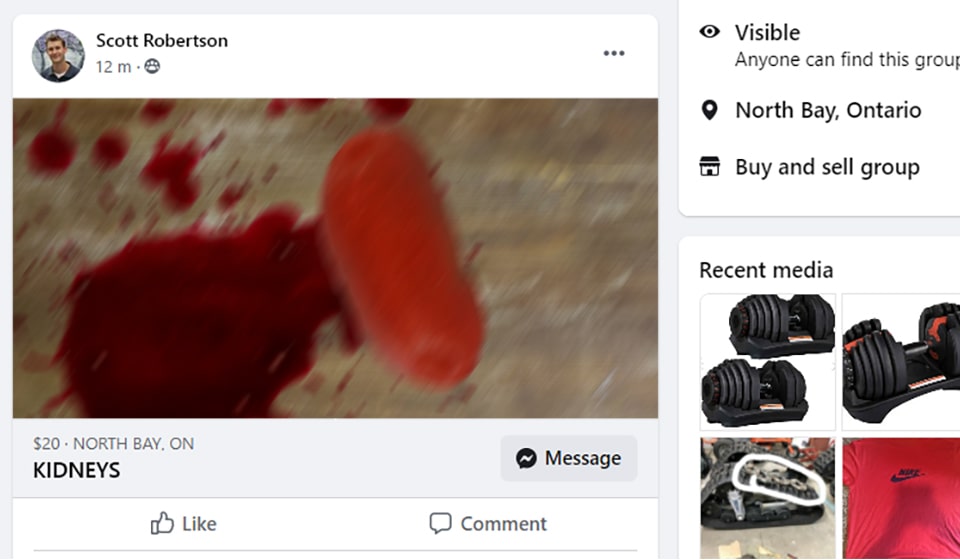 “Late Monday night I was scrolling through the marketplace when I saw an ad,” explains Buy & Sell member Trish MacLean. “It just said ‘KIDNEYS’ and it featured a super blurry photo of what looked like a bloody red kidney sitting on a kitchen table.”

MacLean says she investigated further and was shocked to discover that the ad was just one of dozens posted by Councillor Scott Robertson on the North Bay Buy & Sell.

“I could understand if Scott was selling his right kidney for charity or something,” says MacLean. “But there’s too many ads and there’s hundreds of photos of kidneys on the Buy & Sell so they can’t possibly all be his.”

The North Bay Bay reached out to Councillor Robertson about his highly suspicious kidney ads.

Initially Robertson denied any involvement; however, after two days of continual harassment, the Councillor finally admitted to selling kidneys.

“Ok, you got me!” cries Robertson. “I’ve got over 20 lbs of red kidney beans I grew last summer that I’m trying to sell! My wife told me I had to get them out of the house by September, so I’m trying to move them quietly. I’m practically giving them away.”

Why not just throw them out?

“What a waste!” exclaims Robertson. “Beans are incredible – they’re high in protein and fibre. Plus, I really love beans and I want everyone in North Bay to have just the best possible chilis.”

“Speaking of which, I’ve got some spicy vegan red bean chili on right now. Did you want to have some?”

Updates to follow after a delicious home cooked meal.