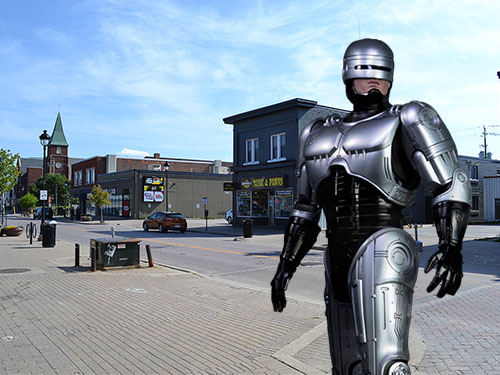 NORTH BAY — After months of searching, scrutiny, and review, Downtown North Bay has found the “perfect solution” to crime in the downtown core: RoboCop.

Wade is the head of Omni Consumer Products’ North American Branch, who will be supplying the city with their very own RoboCop.

“North Bay’s RoboCop will come with all the things it needs to clean up the downtown,” says Wade. “An Auto 9 highly-advanced select-fire machine pistol coupled with RoboCop’s memory assisted on-board computer and faster than human targeting system will be enough to take care of most loiterers.”

“A built-in flightpack will see RoboCop take to the skies, and a complimentary gunarm containing a 9mm machine gun and flamethrower should be enough to deter the remaining robbers, druggies, and jaywalkers.”

“Downtown North Bay has really outdone themselves with this one,” beams Terrence. “RoboCop is going to make the city’s downtown safer, cleaner, and more fun.”

“So, to all those who would say that City Council and Downtown North Bay have been ignoring this growing problem for years and are only just now making a last ditch effort to remedy the situation, all I can say is…”