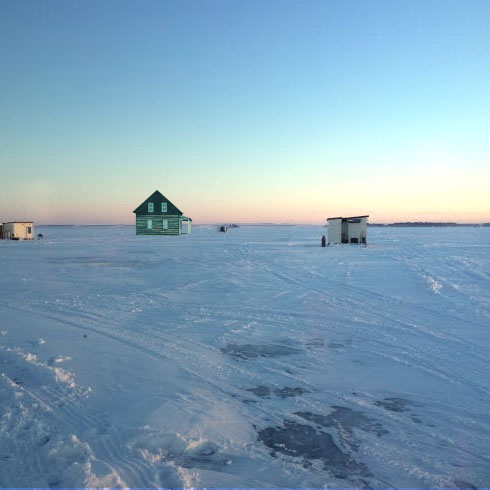 NORTH BAY — When the “Friends of the Dionne Home Museum” fought to keep the Quint Museum in North Bay, this was probably not what they were expecting.

The tiny 1930s home is now sitting some 400 meters from the shoreline on Lake Nipissing.

“Listen, we know the home is important,” says City Councillor Vic Tikus. “But it’s not drawing people in anymore and so it’s up to us to get creative in the fundraising department.”

“To that end, we are now offering the Dionne Quintuplets Home for rent as an ice shack.”

The museum, which until Friday sat near the Marina Point Retirement Residence on Oak St., was moved out to the lake Saturday morning for the first batch of fishermen to enjoy.

“It wasn’t hard getting her ready for fishing,” says Claude Beaulieu, who now rents out the home. “There was already a stove inside, so we just cut some holes in the bottom, and viola! She was ready to go.”

Seven local fishermen used the Quint Home as an ice shack Saturday and Sunday, and Claude reports that the fishing was “fantastique.”

“We caught many walleye and perch, and one big pike. He fight hard, that pike. But it was génial, you know, being able to cook the fish right on the same stove as the Quints family. And at night, we all fight over who gets to sleep in the big bed and who has to sleep in the tiny ones.”

Those interested in renting out the Dionne Quints Museum for ice fishing are encouraged to contact Claude Beaulieu at claudebeaulieu4you@gmail.com for daily or weekly rates.

There are also special deals for groups of five in honour of the Quints.

“It’s a beautiful little hut, the home. And inside they left some artifacts, so you can fish with Dafoe’s pole or use a spinner Elzire made. With the rentals we help with the fishery, we help with the history, we help North Bay, and so everyone is happy.”