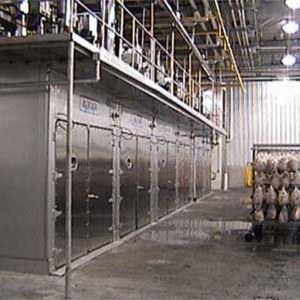 The new plant will be built at 2080 Main St. West, right beside The North Bay Humane Society.

“It is a little strange, yes, but we thought it was important to build somewhere central,” says owner and operator Hector Genette. “We want to keep the jobs inside North Bay.”

Genette, who originally hails from Ussuritov, Russia, says he is taking extra steps to fit in.

“We’re building a near replica of The North Bay Humane Society. The buildings will be identical so that we fit right in with the neighbourhood. Same exterior, same front desk setup. Just a bit different in the back, that”s all.”

“We’re always happy to have new jobs” says Councillor Vic Tikus. “Hector’s plan to open a new exotic meat processing plant in the heart of the city is wonderful. I have nothing but praise for Hector and his wonderful exotic meats!”

In unrelated news, City Council announced the opening of a second dog park in North Bay.

The current dog park is on Champlain Park Road which Councillor Vic Tikus says “is very far from the downtown.”

The newest dog park will be located at the end of Exterer St, which is near Main St. West and Gormanville Road.

“It’s a great location because it’s so close to The North Bay Humane Society,” says Tikus. “They’ve agreed to let us use the land behind them for another park. Their only stipulation is that the park be totally open on all sides and that dogs never be kept on their leashes.”

The creation of a new dog park so close to the new plant won’t be a problem, says exotic meat plant owner Hector Genette.

“Your Council told me that a new park was going in and I was overjoyed. Those fresh, lively, whole dogs will be so happy there.”

On the subject or the plant, Hector Genette is hopeful that in time North Bay will accept the processing plant.

“I know it is strange to have an exotic meat processing plant right in the city, but I believe that it was the best location. I’m confident that once North Bay has had a secret recipe sausage or a spicy mysterydog they’ll come around. You know, there’s lots of jobs made. The butchers could be your neighbour, or your friend, or your brother or sister. It’s a family business.”