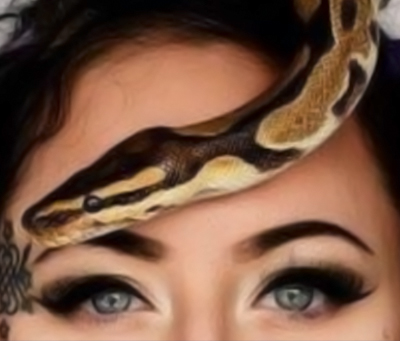 NORTH BAY — Local snake Pandora is hoping to grace the cover of an international magazine.

“Slink Magazine,” a publication that exclusively features snake models, is holding an online competition that sees dozens of legless lizards vie to be crowned “Serpent Supreme.”

The winner will appear on the magazine’s cover and be awarded $25,000.

“That’s a lot of mice and gerbils,” says Pandora’s friend Kristen Slang. “A snake’s got to eat, you know?” 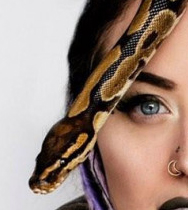 Pandora posing on top of a model (name unknown)

Pandora, a three year old black and gold ball python, is currently ranked #1 in her division and has qualified to enter the Final 3 on Monday.

Her unique modelling style, which involves hanging over the necks of human models, has garnered acclaim from the snake world.

“Everyone’s talking about Pandora these days,” says human and fellow model Alice Addams. “It’s humbling to work with such a unique visionary.”

Addams herself is hoping for international fame as she tries to get on the cover of Inked Magazine.

“But we’re not here to talk about that,” says Addams. “Let’s talk more about Pandora.”

Pandora has a long record of modelling, having appeared in exclusive publications like “Snakes and Garters,” “Hiss and Hers,” and “Snakes Illustrated.”

Addams sees a long and prolific career for Pandora.

Those looking to support Alice Addam’s pursuit of a front cover appearance on Inked Magazine can find her page here.

Those looking to support Pandora on her quest to win $25 000 and eat as many mice as possible can support her by clicking here.