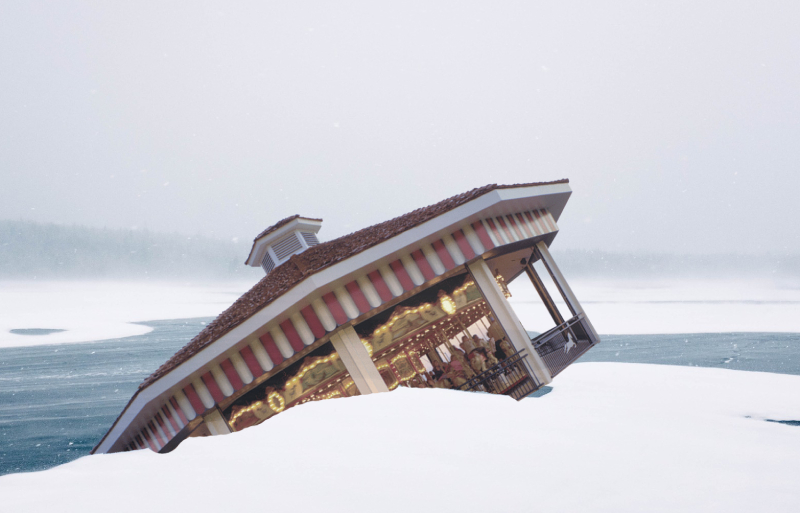 NORTH BAY — The North Bay Heritage Carousel has been lost at sea, or rather, to Lake Nipissing.

The carousel, which measures 28 feet across and boasts 18 fully carved wooden animals, broke from its cement paddock late Wednesday evening, and slid down to Lake Nipissing. There, its immense size both propelled it far onto the ice and then sunk the beloved children’s ride.

City workers are blaming a heavy spring thaw and a lack of funding for winter maintenance.

North Bay City Police report only minor injuries as the carousel carried three pedestrians, two Honda Civics, and a cat on a leash out with it onto the ice.

Local fisherman Bishop ‘Two-Teeth’ Bradley was an eyewitness to the carousel’s escape, launch, and sinking.

“She came out bellowing like a walrus in the night,” gnarls Bradley. “She had 20 feet on her from tip to tail, an’ six tons. Top of ‘er balder than God’s head, with a look in her eye like a rat headed south.”

Bradley says the carousel travelled “two leagues” out onto the ice, before a “mighty crack, like the whip o’ Lucifer himself” sounded and the structure sank.

“Arr, she’s 40 fathoms down now,” moans Bradley. “She had a mad wobble on ‘er, bobbing like a boiled owl, she was. There’s naught a vessel here that could bring her up now.”

“It was a sight to see, her sinkin’ like that. Not ever in my life will I I forget those haunting sounds – the sounds of drowning horses.”