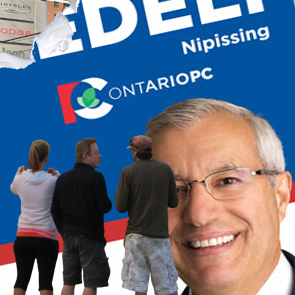 Measuring over 90 feet high, the placard – which features a younger, smiling Fedeli – blocked off all four lanes of traffic. The gridlock included several school buses, two ambulances, and one man on a unicycle.

The gigantic PC Party advertisement stood proud and unabashed against the morning sun – a bright blue brazen billboard – before falling over and killing six people.

Fedeli was not reachable for comment, but local PC rep Kris Hibbert did offer some insight.

“I don’t know how the sign got onto the road,” says Hibbert. “I don’t know who commissioned it, or even how they constructed it. But just like the PC Party of Ontario, that sign stood up for what it believed in. It rose from the ground up, promising a brighter, better Ontario for all!”

On the six people crushed by the sign, Hibbert appeared unphased.

“Meh. They were probably going to vote NDP anyway.”