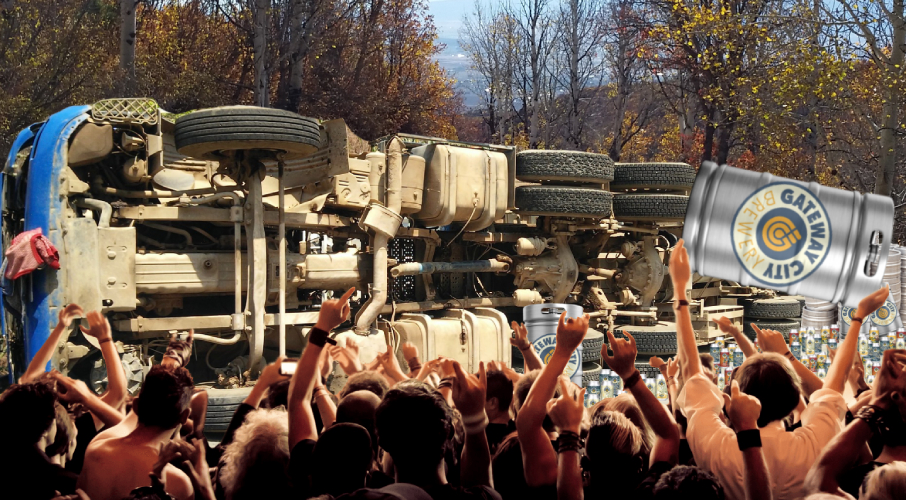 The truck, which authorities believe “took a wrong turn delivering its precious, malty cargo” hit a large patch of loose gravel on Birchs Road and overturned. The driver then fled the scene.

“We understand that the party started shortly after,” says North Bay Police Sergeant Jeanette Lawrence. “Someone investigated the truck and found that it was both refrigerated and contained nearly 2 kiloliters of beer in both cans and kegs.”

From there, hundreds of people showed up with chairs, guitars, hammocks, BBQs and “many a good friend” to drink some fresh, flavourful Gateway City brews. Intrepid partiers continued to bring gasoline in order to keep the tilted truck running, which kept cool its delicious cargo.

“The shipment was insured, so we’re not angry about it. But we are a little disappointed we weren’t invited.”

The party only ended when the last beer, a Dark Rye Lager, was cracked open by citizen Trish Towner.

“Nectar of the gods!” yelled Trish, before taking the time to enjoy the full-bodied, savory brew which features hints of chocolate and caramel.

Eye witnesses say that the remaining revelers stuck around for a few hours after the last beer was consumed to discuss sports, music, and the finer points of Gateway’s India Session Ale, which incorporates a light malty base with a unique array of orange, citrus and berry flavours. With the beer supply exhausted, party goers picked up the empties, righted the truck, and returned to their admittedly less flavour-filled lives.

Some of the partiers admit to having withdrawals.

“I’d do anything for another taste of that sweet, sweet Pils,” says party goer Stephen Philbert. “Anything. I’d even write a complimentary article in a satirical news website.”