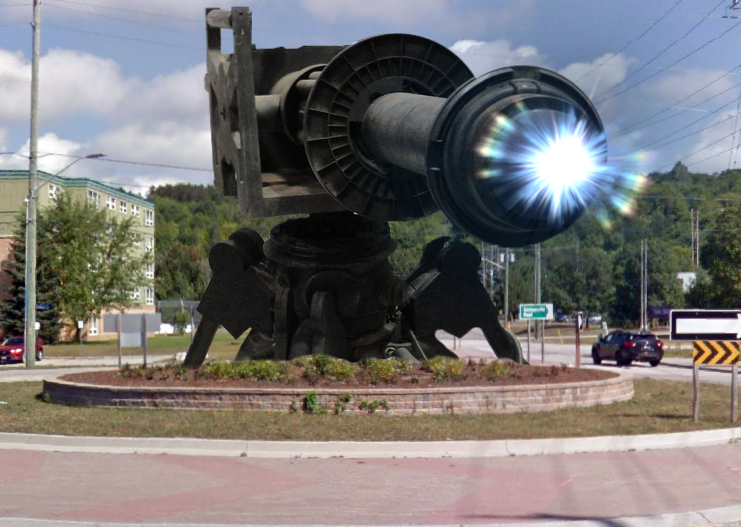 “I’ve been driving on the roundabout since it opened in 2009,” says Councillor Vic Tikus, “and I’m comfortable with it. Too comfortable. So to shake things up, I say we install a death laser.”

“There’s been almost no accidents on the roundabout,” says Tikus. “But I feel like there’s going to be one soon. People are getting too relaxed and too complacent going through. So hopefully the presence of a gigantic, fully-functional laser will keep people awake and aware and will prevent any potential collisions.”

The roundabout’s death laser may be one of multiple, as the yet-to-be-completed Chief Commanda III is also slated to feature a disintegration ray.

Tikus says that the laser will be “mostly” for show.

“Have no doubt, though, it will be fully operational,” smile Tikus. “The laser will be able to produce 1.5 petawatts of power for 3 second bursts, which should be more than enough to melt a small car or ignite an SUV.”

“A state-of-the-art A.I. will track drivers,” reveals Tikus. “Anyone who stops in the roundabout will be given a warning shot. Anyone who travels the wrong way will be obliterated.”

Citizens can expect to see the laser installed and ready by mid-August.

“As long as everyone knows how to use the roundabout properly there will be nothing to worry about,” says Tikus. “Pick the correct lane, enter the roundabout at no more than 20 km/hr, and don’t enter side-by-side.”

“Also, maybe don’t cut anyone off on College and Gormanville. I actually don’t know how far the A.I. can see, so…. it’s probably best not to take that chance.”