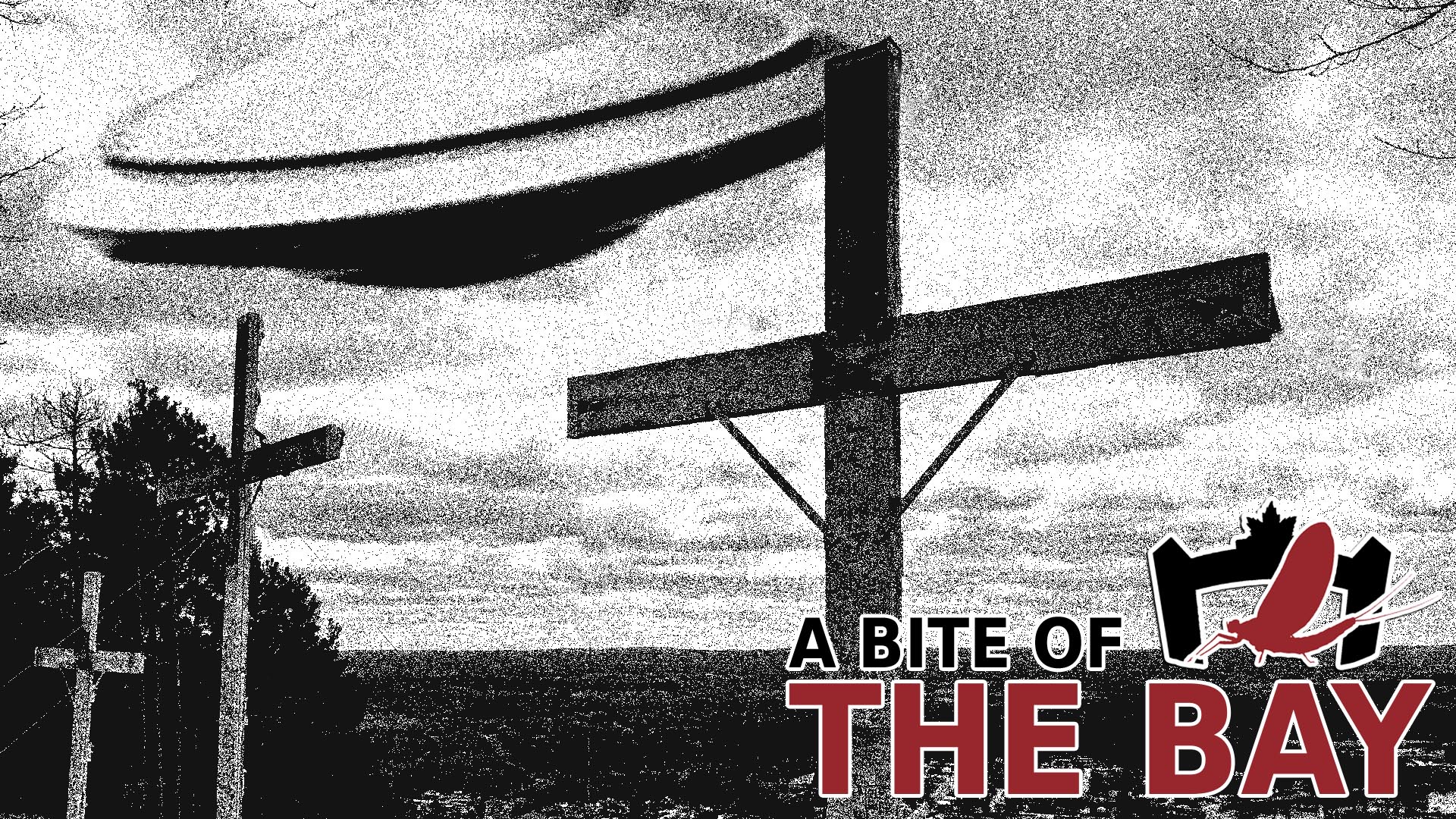 MATTAWA – If you have ever lived in (or more likely driven through) Mattawa, you would have seen the famous 3 white crosses on top of Laurentian hills.  But how did they get there?

“My grandma thinks they erected by the local clergy to watch over us and protect us,” says Mattawa resident Rene Oulette. “In 1917 the church was like ‘hey, a cross?’ and the community was like ‘do it up.’”

“They all couldn’t agree so they each put up their own cross, that’s how we ended up with 3 near identical crosses based on different specific beliefs,” explains ‘Dirt Road’ Dirk Wilder, author of the unpublished book Three Crosses Outside Mattawa, Ontario: Why the Mystery?

“But to be fair that is only one of the many stories I’ve heard of how the crosses got there.”

With the story of these crosses being passed on orally from generation to generation, there are varying stories going from invading forces propping the crosses up to that hill being the final resting place of Saint Louie, “Canada’s Jesus.”

“While I was writing my book, I came across wild stories,” says ‘Dirt Road’ Dirk, “even heard one story about how someone planted some rosary beads and they grew into full sized crosses. For every person you ask, you get another story with just a small change.”

While even people with lots of research and resources have failed to find enough evidence to prove how they got there, one local believes he has the only solution that has any evidence.

“It’s as simple as that.” says local blogger and amateur UFO hunter Rick Stewart. “Why do you think there’s so many different accounts of how they got there?  It’s almost like there’s no explanation! But you know what explains the unexplainable perfectly?  Aliens.”

Stewart believes that aliens came to earth (specifically to the Mattawa area) and planted the crosses mysteriously one night.  He believes that Jesus was an alien, which explains why aliens would put crosses there and “not something weird like a pyramid or giant statues of big headed men.”

“Like, you want me to believe that PEOPLE built that? I’ve tried hiking up there – there was a lack of water fountains, stairs and bugs were everywhere.  If me, a man of the future, struggles to climb it, what troubles would simpletons from the past have in climbing it?”

“It could only be aliens.”

Answering All Of The Questions

It seems like for any question, ‘aliens’ could be the answer.  Why Mattawa? It’s where the Ottawa Rivers Meet.  Why up a hill?  Easier access for a spaceship.  Why three crosses?  It’s the least amount of supports needed for a structure to be able to stand.

Stewart leans back and smiles.

“Now that that’s all settled, let me tell you the real story of all the wooden statues on Main St.”

“Let me warn you though: if you don’t believe in Bigfoot yet, you’re going to!”