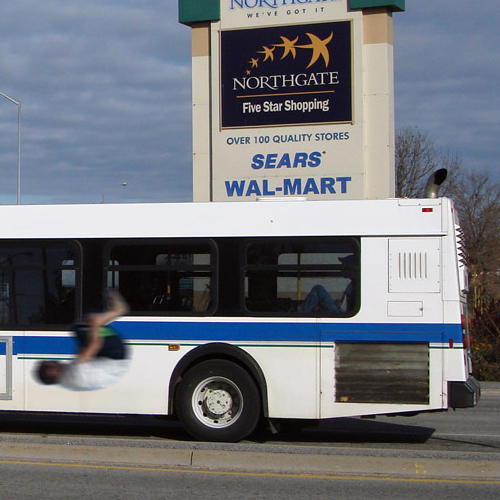 NORTH BAY – Jenny McCarthy is a 60 year old nurse at Cassellholme. It is vital to her job that she gets to work on time, but some new changes designed to counteract late buses have her worried.

“I’m worried most about all the material that North Bay City Transit has been putting up,” says McCarthy. “This past week I’ve seen posters hung up around town and at the stops. They’re handing out pamphlets to riders, and they all say the same thing: ‘Is your stop coming up? Remember to Tuck and Roll!’”

Greg Raimi, the Manager of Transit for North Bay, explained the flyer’s purpose.

“All we’ve been hearing these last few years is complaints about the buses being late,” says Raimi. “Like, a lot of complaints. So to combat this we formed the ‘Board of Concerned People Who Don’t Ride the Bus.’ We’ve been meeting every Thursday at 6 to brainstorm solutions.”

“When we started, we talked about getting a bit more strict with our drivers to ensure a more consistent schedule.”

“But after we got all the jokes out of the way we really got down to business.”

“The first idea we had was to offset the schedule by 10 minutes to ensure the buses would then run on time. The second was to eliminate stops all together, encouraging the ‘Tuck and Roll’ strategy used to exit a moving vehicle.”

“We weighed the pros and cons. The major issue with offsetting the schedule is that the bus drivers would probably find some way to be 10 minutes later than the already offset schedule, which just turns into a loop of lateness.”

“So, we went with the second option: Tuck and Roll.”

People who ride the bus are concerned.

“I don’t understand how this is their best idea,” says McCarthy. “The ‘Board of Concerned People Who Don’t Ride the Bus’ are a North Bay Transit group who have spent years brainstorming, collecting hundreds of thousands of dollars every year PER member and this is the best they came up with?”

“I’m 60 years old, and I see children and families with strollers on the bus. How are they going to Tuck and Roll? How does someone Tuck and Roll with all their groceries?”

“But let’s just say that the Tuck and Roll part is flawless… How am I supposed to board the bus? That’s a part that they have kept oddly quiet about.”

Raimi plans to Tuck and Roll the new North Bay Transit changes out in the upcoming weeks. More on this story as it comes rolling past every stop sign.