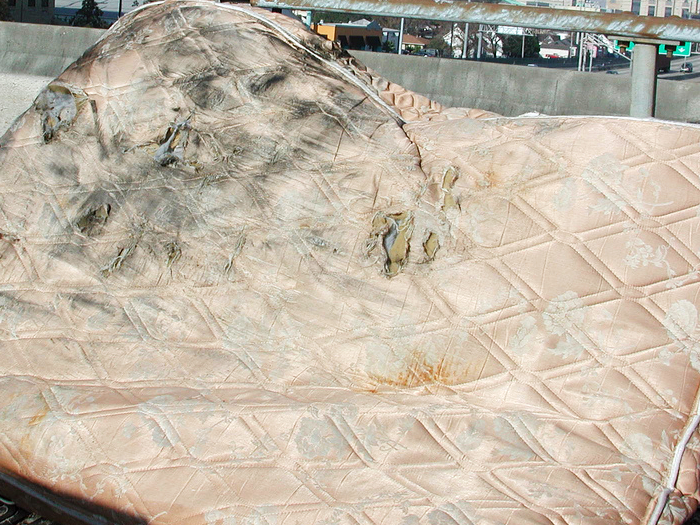 NORTH BAY — Times can be tough, but one local citizen is utilizing social media to help the every-day, penny-pinching family get by a little easier.

“I’ve noticed things around town,” says Janet Gilmet, head of the Facebook group Free Pop-Up Mattress Disposal Sites. “There’s garbage everywhere and syringes on the streets. There are homeless people just scraping by, existing in a world that feels like it’s against them.”

“But more importantly, I’ve noticed a lot of discarded mattresses. Everywhere: mattresses. So I created a program to help stop all these mattresses from springing up around town.”

Currently in North Bay, residents can dispose of mattresses at the Merrick Landfill for a $20 fee. But not everyone has access to a vehicle, can work the landfill’s operational hours into his or her complicated schedule, or have the $20 fee required for disposal.

“That is where I come in,” says Gilmet. “With the new Facebook group ‘Free Pop-Up Mattress Disposal Sites,’ I will provide continuously updated locations where people can dispose of mattresses.”

“Sure, I wouldn’t say that what I’m doing is the most, um, ethical, or legal, but… it’s effective. Since I’ve started this service I’ve helped dispose of 30 mattresses. I see it as doing more good than harm for these families. Probably not for the program to get rid of the mattresses, or the businesses that have the dumpsters, but I’m not them, so who cares?”

Gilmet says she has insider information that the Wal-Mart garbage compactor is on the fritz, which means that an open top dumpster is expected within the next couple of days.

“So get ready Wal-Mart, cause you’re gonna have more mattresses than Sleep Country and The Brick combined!”

Make sure to join the Free Pop-Up Mattress Disposal Sites group on Facebook to stay up to date.