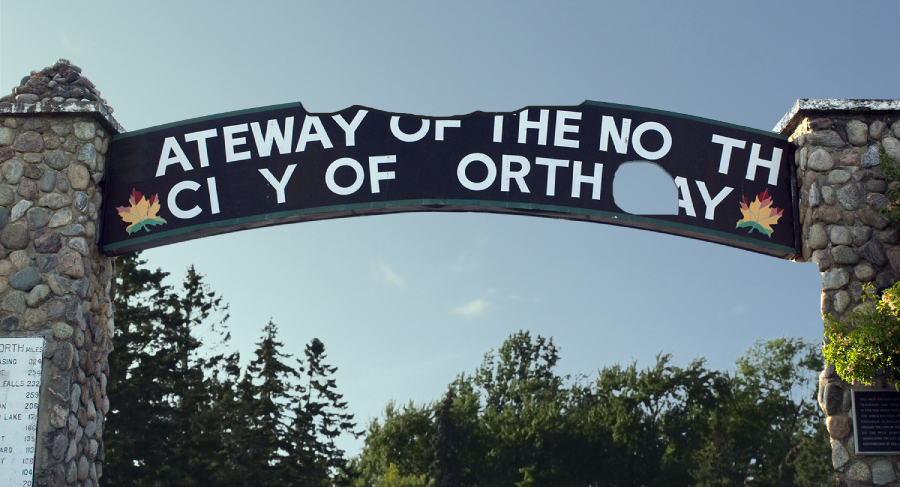 NORTH BAY — A chop shop which operated around Lee Park has sold off pieces of the “Gateway of the North” arch.

“I think the shop started small,” says North Bay Police Detective Matthieu Ouellette. “It’s one part of a gang of bike jackers who steal bicycles from around town and then cut them up to make new bikes which they can either pawn or sell.”

“But the overpass chop shop got a little creative one day, and began to diversify.”

The bike jackers, who call themselves the Gateway Grabbers, started doing just that.

“Tuesday morning we got a report that the Gateway to the North arch appeared to be missing a few stones,” says Ouellette. “We figure that happens. The stones are very old, and that’s a job for City Works.”

“But later that day someone calls in to say a few of the letters are missing now too, and by the end of the day, someone has straight up cut the beaver insignia off the top.”

The Gateway Grabbers moved fast, selling the entire beaver for an estimated $80 CAD to an anonymous buyer in the King Putt parking lot.

“An eyewitness saw the transaction go down. It’s kind of hard to hide an 8 foot square chunk of metal with a beaver on it.”

Since the partial dismantling of the arch, Detective Ouellette and the North Bay Police have rounded up as many Gateway Grabbers as possible for questioning.

But the detained Grabbers have been tight lipped.

“Two of them have talked,” says Ouellette. “But they haven’t told us much. We know they’ve been selling chopped up bikes, but we knew that already. People kept finding random bicycle parts around the area: a handle under the overpass, a chain by Lee Park, even a couple of novelty horns and a pink basket in the ONR parking lot.”

“But when it comes to the arch, nobody will talk about it. We know they cut it up, but truth be told, that’s not really what worries me the most.”

Ouellette says he believes there is something much more “sinister” going on.

“All I’m saying is the CF-100 looks a little lighter than it did yesterday,” says Ouellette. “And one of the Grabbers has a pretty thick Russian accent.”