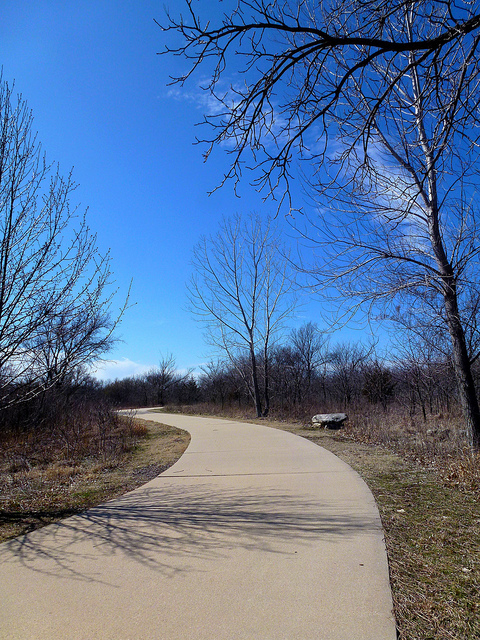 NORTH BAY — It was just another day for Tracy Pender. She woke up around 7, made a cup of coffee, and then took her dog Gary for a walk.

“We usually walk down Marshall Avenue and get onto the trail there and come out around Gertrude to head home. But this morning was different. There were five people standing in front of the trail sign, arguing.”

What they were arguing about was the name of the “Kate Pace Way.”

“Which is stupid because we all know it’s the ‘Kate Skate Way.'”

Tensions began to rise when another dog walker joined the conversation with “The Rat Race Sway.”

The trail sign, which appears to have been hit by an errant snow plow, was of no help.

With more walkers joining in, it wasn’t long before hostilities broke out, attracting the police.

In a news release this morning, North Bay Police Services stated that even though the trail sign was damaged everyone knows it’s the “Gate Case Play.”

“I mean, who the hell is Kate Pace anyway? Tyler Nicholson is North Bay’s pride and joy now.”

Despite the news release, wide-scale riots have broken out, particularly around the “Wate Pace Kay.” Residents located in the Ferris and downtown area are advised to stay inside, and keep well clear of the “Kay Pate Pay” until order can be restored.

“All I wanted to do was walk my Gary,” says Pender. “And now there’s people brawling in the streets, flipping cars over, and I swear there’s a guy out there carrying some sort of trident.”

Sergeant Jeanette Lawrence of The North Bay Police assured residents they would have the city-wide anarchy subdued quickly.

“But, uh, listen, if you see anyone with a trident, just kind of stay out of their way. And whatever you do, don’t go out onto the ‘Eight Grace Bay.”